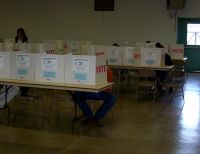 After every election, we get to see the same sort of talk from otherwise reasonable people: our side won, and therefore this is a “mandate from the people,” and “our side lost, so I’m looking for another country to which to expatriate myself.” This time around, we also get a stream of little ironies—like the environment panel being headed by a man who believes climate change is a hoax.

It is far too easy to blame the voters for the fiascos of government and far too easy to believe it really makes a difference who is getting elected. As things stand, the government is demonstrably not working for we, the people. Both parties exhibit heavy bias towards business and corporate interest over that of the public good. Which party is in power seems to have little to do with what sorts of legislation are getting passed. In short, whether one supports the red or the blue team has little to do with what government will do for us overall. In other words, it is less ironic that a man who publicly denies climate change is head of the environmental committee than that the American people continue to participate in costly and time-consuming elections giving power to people who work for corporations rather than citizens.

In public discourse right now, there is much talk about the American ethos of personal responsibility. We’re all bootstrappers here, lifting ourselves out of poverty and into the sorts of life we wish to live. At the individual level, it might be more or less helpful to think in these sorts of terms. If you genuinely believe nothing you do will make any or much difference in your circumstances, there is little point to getting out of bed in the morning.

At the statistical level, though, where we use samples to try to inform us about large groups of people, we find that individual responsibility is not the whole picture. Statistically speaking, certain groups of people have a distinct advantage from the starting gate over other groups of people. It certainly helps to be born a White male in the United States. It also helps very much to be born wealthy. The best predictor of your lifetime wealth actually has not much to do with how hard you work or what school you go to or what your grades are or even whether you live life between the lines: the best predictor is your parents’ lifetime wealth. What school can they afford to send you to and who do they know? In other words, what opportunities for wealth are created for you by wealth? And in other words, we will not end poverty by ending welfare or end crime by building more prisons.

The same is true of our political system as it stands. Your vote is actually rather meaningless on its own. The opinions of regular folks like you and me count for next to nothing in the national process. The opinions of business leaders count for far more, and this is reflected in the sorts of decisions our government makes.

I tend to argue that voting is harmful to our democracy: it continues to foster the illusion that voting matters, therefore forestalling the possibly productive despair that could lead to reform the same way that your job that keeps you barely on the edge of poverty, keeps you tied to the system. If you lost that job, it might inspire you to chase something better, and to do so wholeheartedly, perhaps even to go off the grid entirely.

I’m certainly open to debate and argument about this. I’m a scientist and therefore willing to embrace uncertainty. An argument we can hear lately is the Affordable Care Act. Certainly I benefit from this policy, and it is hard to dismiss lightly (or really easy to dismiss lightly, if you listen to too much commentary from politicians). But this signature reform can, in some lights, be seen as two parties arguing over who is to benefit. And by who, I don’t mean the people or the corporations, but which corporations.

Even as they raise rates in response to legal requirements for better coverage, insurance companies benefit tremendously from the requirement that everyone be covered. People who normally do not buy or really need coverage most of the time now contribute to the pot. While healthcare coverage is certainly expanded and many people benefit from these laws, our elected officials did not start from a strong position but from a compromise position.

In other words, Democrats championed a Republican plan for healthcare. Many on the blue team are very dissatisfied with this plan because it is far too conservative. A more liberal starting point would have been universal health care, Medicare for all. But we started instead with the compromise position and compromised from there.

In this environment, I remain unconvinced that it matters who you vote for or whether you vote at all. Six years ago, we voted to close Guantanamo Bay, get out of the Middle East, achieve universal healthcare, and reform campaign finance as well as high finance. Six years in, none of these goals is accomplished.

Even the economic data showing Mr. Obama’s administration has fixed the economy are open to interpretation. While rich people are doing better than ever, the housing market remains sluggish, the employment rate does not reflect underemployment or the folks who have given up looking for meaningful work, and financial reform lies in tatters. The big banks are taking risks as big or bigger than before the collapse.

Here’s the point: in the same way that Dr. Cosby blames Black people for being poor, citing funny speech, sagging pants, and sideways ball-caps, it is much too easy to blame the American electorate and especially individual voters for what is overall a large-scale problem not easily or imminently corrected by acting more responsibly, at least not in the way we are told to be responsible. You won’t get a job by turning your hat around frontwards and pulling up your pants, and you won’t influence public policy by voting.

If it’s a clear conscience that you’re looking for, voting might provide the absolution you think that you need. The general refrain is, if you don’t vote, you can’t complain. The trouble is that even if you did vote, and even if your vote mattered, there is no guarantee your candidate was elected. Does this then give you the right to complain, or does it really nullify that right? In other words, in your system, democracy worked, and therefore an uncomplaining acceptance of the other party’s mandate is in order. If you did vote, and you think voting matters, you are the one with no right to complain.

But complaining is a fundamental part of the process of democracy, as are non-compliance, civil disobedience, and a free press. A *really* free press, not a corporate media that exists to make profits but one that serves the public good. My not voting is a complaint against the system and therefore a participation in the system. This blog entry is a participation in the system. We are all collectively responsible for our political system.

When I woke up this morning, where I started was with this quote from Dostoevsky’s The Brothers Karamazov:

If we were to abide by this acceptance of guilt and responsibility, if we were to realize we are not only no better than anyone else but only as good as the least worthy, worthwhile human, then perhaps after an election that does not go the way we wanted we wouldn’t talk about secession from the union or moving to Denmark. We wouldn’t blame the people who didn’t vote. We wouldn’t throw glitter on people who disagreed with us.

We might, rather, examine how the polarization and hate out there keep the current system going. We might examine who profits from racism and by accepting fault for that, search for the means to change it. The same with wealth inequality, global warming, war (literal war as well as the war on the poor, war on women and so on). We might, knowing that we are culpable for all the acts of our government, seek to forestall or turn aside those acts by not propping up the illusion of democracy but acting in favor of democracy.

If all you did was vote, you did none of these things.