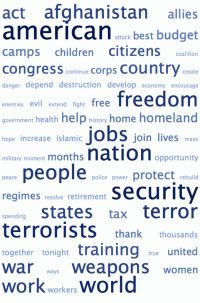 Words, words, words!
I’m so sick of words
I get words all day through
First from him, now from you
Is that all you blighters can do? – Eliza Doolittle in My Fair Lady

I used to feel that words, that language, were an infinite resource. That no matter how many I used, there would always be more, even if I simply repeated some over and over: “All work and no play makes Jack a dull boy” or “The quick brown fox jumps over the lazy dog.”

Lately, however, I finding language to be finite. And not simply because there are a certain number of words in the English language–1,025,109.8 as of January 1, 2014, according to the Global Language Monitor, which apparently keeps track of such things (and now, I’d like to know what constitutes 0.8 of a word, but that’s another story). When I wake up in the morning, I do not want to utter words before coffee—often the task is impossible anyway. When I do leave the house and begin my working day, my entire Being-in-the-World revolves around using words. Teaching, writing, lecturing, explaining, editing. All words. Texting, emailing, phoning. More words.

In college, I spent my winter break in Europe, travelling with friends who were doing their junior year abroad. I met one friend in Paris and we took the train south to Nice for New Year’s Eve before heading back to the University of Edinburgh, where she was doing her semester abroad. Upon settling into our quaint little Riviera hotel room, she said to me a line I never forgot because at the time I found it so puzzling: “Let’s save some of conversations so we don’t run out of things to talk about.” It never in my wildest dreams occurred to me that we would possibly run out of things to talk about—we were both young and on the French Riviera for the first time, we had been friends for three years already and had shared many crazy experiences, as college friends tend to do, and we were both Ivy League students, so we had plenty of intellectual subjects to discuss should the mood strike us.

I’ve thought about that comment many times over the years, and have found situations where it would have been appropriate (my friend and I actually never did run out of topics then, nor have we since). Sometimes, there is nothing more to say. The words have run out. The tank is empty. The well is dry. And these days, when I get home from work, that’s what I’m feeling. I can’t write. I can’t speak. I can’t email. I can’t text. I can’t even read words on page. The best I can do is absorb some abstract images from the television, usually without attending to the dialogue.

Some people might label this new phase of my being as a more dramatic form of my “introversion” or maybe even “burnout,” but that simply adds more words to the problem. Even as a writer, I do believe quite strongly that there are moments—and some of these may be quite long periods of time—where words either do not belong or are not necessary. In these times, I would rather return to presence, to being. Silence and body language can also communicate, and we often fail to use these profound languages in the same elegant ways we try to use our words. But maybe it’s time we try, before—thanks to texting and Twitter and social media—we end up with nothing but word salads.