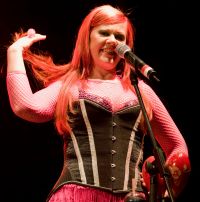 Case in point. Kate Pierson of the B-52s has written and put out a new song entitled “Mister Sister.” The song is from her forthcoming album, Guitars and Microphones, due on February 2015. I have not heard the single nor seen the video. But I awoke this morning to yet another Facebook kerfuffle surrounding an article appearing in the Huffington Post by Jamie Cooper Holland. Holland, who self-identifies as a “queer and trans writer, musician, audio engineer, activist, and student from Berkeley, CA” published an open letter to Pierson criticizing her for the song and for Pierson’s comments that the song might become a “‘trans anthem’” of sorts. Holland begins the letter/article by saying, “I am 38-year-old trans woman and I love you.” The rest of the article may as well be the “but…” In spite of being of lifelong B-52s fan, in spite of all the past positive history, Holland would like to outline all the reasons why this song should not be a trans anthem and why Pierson cannot write a trans anthem and how the video includes people opposed to transgendered rights.

In response, Kate Pierson published an open response on her Facebook page, stating first how much she appreciated the thoughtful response and also how her comment about “trans anthem” was taken a bit out of context, and that she intended it not simply to be an anthem for a particular group but for all those who felt “betrayed by the mirror” those who were still “transcending.”

I might have left this all alone had I not discovered this all through the comments to Pierson’s response, some of which sent me through the roof. While some had the predictable, “Go Kate!” or “We love you!” that you might have heard at a B-52s concert, others were more incendiary. One response said that Pierson completely disregarded the letter and disregarded the experiences of all transgendered people and was completely disrespectful to their lives and their worlds. Others criticized the performers in the video and agreed with Holland. Some people replying fought amongst themselves, feeling someone with a “man’s name” “mansplained” things to them and a whole dialogue evolved in the language of sarcasm.

Holland’s piece brought up the issue of Pierson’s video in the wake of Michael Brown and Eric Garner, and their respective grand juries, and protests across the country. Holland discusses the very important concept of intersectionality:

Understanding that issues of oppression overlap each other, called intersectionality, is important in the way that it helps us to be mindful and to work to recognize our individual privileges and how they affect others. It’s vitally important that we not make assumptions about being able to adequately understand or represent communities of which we’re not a part.

When we invoke such touchstone issues as Michael Brown and Eric Garner and claim that the LGBT experience is akin to the African-American experience, someone is bound to complain—in fact, many, probably, for myriad reasons. If I claim to know something of marginalization having experienced it on the basis of religion, and then later on the basis on gender, someone is bound to chime in and dismiss my experience as less than some, although perhaps more than others.

Why are these discussions imbued with so much quantitative comparison, so much negativity? Why are only a privileged few allowed to talk about such experiences, to write about them, to sing about them? It is a reversed form of privilege.

Of course, it’s vitally important we not make assumptions, that we do not generalize or pretend to know experiences that we do not or cannot know. That’s why we need to have dialogue. But we shut down dialogue when we tell others to stop talking because you don’t know what you are talking about. Don’t shut down the dialogue, open it up! Educate.

And don’t keep cheering yourselves for doing a good job…keep the dialogue ongoing. Don’t make the words inefficient. If you are going to use words, make them count.