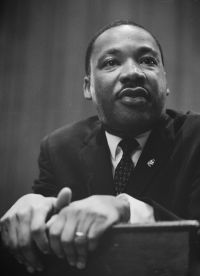 I recently took my son to see Selma. There was no school because of the weather, so it seemed like a history lesson was in order.

Oyelowo was brilliant as Martin Luther King, Jr.. A sensitive performance, nuanced. Fear in his eyes at just the right moment, to just the right degree. Not a film for the faint-hearted, at times brutal and shocking. My son, just ten, was moved pretty deeply by it by the end although he had trouble with some of the more violent scenes.

I worried about exposing him to this story, knowing many of the facts and events that would be portrayed. But the fact is the violence that took place in Selma, AL, and that followed, the people involved in the movement—this violence was real. It happened, much as it was portrayed. I don’t think we can turn away from it, shield our children from it.

I cried through much of the violence (and much of the non-violence, if we’re being honest). He watched me cry at times. Even if I had wanted to hide the crying, it would have been tricky. He wanted to rest his head on my belly, and it shook as I sobbed. I only saw my own father cry twice. Once when his father died, and then not for long—they didn’t get along. And once when my sister accidentally put a bowling ball through the glass door to the backyard.

I wonder what it will mean to him, to my son, to have seen my crying.

I hope it points him towards something important. Towards empathy and away from violence.

In the car on the way home, I asked him what he was thinking. He said he was very angry—but there were tears in his voice. I asked what was making him angry, and he said it wasn’t right for people to treat their own kind that way. Not for White to treat Black that way. I asked further and he went on: it isn’t right for Americans to treat other Americans like that. With violence (the whip especially upset him) but also segregation and the denial of basic rights—like voting.

So, a hard afternoon. We can’t totally shield our children from trauma but we can be with them through it, let them know their grief and anger is pointing in the right direction. We talked around all of this before and after the film. And I’m aware of my White, liberal privilege here: too many fathers’ sons aren’t introduced to the violence that underlies our society through a history lesson at the movie house. They are introduced to the facts of life with a conversation about how to act around police officers to limit their chances of being beaten or shot. Or by funerals for their friends and family. Too many funerals.

In many ways, not much has changed since King was murdered. The horse-whips and billy-clubs have been put away, to be sure. But people are still dying. Some of the violence has become procedural (e.g., mass incarceration) and voting rights restrictions have become covert (voter ID laws, reductions in early voting, closing Black polling places and so on, as well as the fallout from mass incarceration). The hardest part of the day’s history lesson was this: that things have only really changed in appearance.

What I set out to write about today, though, was this: King was a man. He has schools named after him, statues to him, a day of honor and remembrance, but he was just a man. DuVernay directs Oyelowo to excellent effect through a script that excellently portrays the humanity of Dr. King without debasing or demonizing him. This is not an O’Reilly book, a character assassination, but a look at a person who lived and died. A loving and unflinching look.

People are fallible. King had affairs, experienced fear, sometimes backed down. Sometimes lost faith and had to be buoyed up by his fellows. He was a human being.

It is too easy to make heroes, to turn our memories of the people who suffered and strove to make things better into statues and quotes, honors and prizes and special days. To idealize them, imagine they could do no wrong, imagine they were different from us. Or, worse, better than us.

To me, the importance of this lesson is that we ourselves are just like the people we render as heroes. They were sometimes afraid, just as we are. And they stood up, stood for something, suffered, and sometimes died for what they believed, not because they were special but because they were human. That kind of courage belongs to all of us.

You don’t have to be a hero. You just have to think about what’s right, and try to do that.