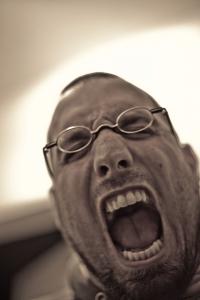 The focus of my dissertation research was the phenomenon of abrasive leadership, that is, a pattern of managerial behavior that causes significant distress for coworkers, impacting organizational functioning. In doing my initial research, I found that most of the writing on this topic was focused (quite understandably) on the recipients of this behavior, those poor coworkers who had suffered the wrath or impatience of a frustrated boss. There was really nothing written from the point of view of the so-called perpetrator. Much of the popular and academic literature depicted these individuals as evil, disordered, or both. It seemed that the prevailing theory, at least in North America, was that abrasive leadership was caused by a bunch of bad apples.

This explanation simply did not fit my experience with coaching many of these abrasive leaders. In fact, I had found that many of these bully-bosses were actually hard-working, passionate (if not intense) individuals who had little understanding of the depth of their impact on others. Most were chosen for leadership roles not because they were great leaders, but because they got things done. They were willing to drive themselves exceedingly hard (and often to a near breaking point) to achieve their targets. Few had ever received any clear feedback that their behavior was unacceptable, and for the most part, the organization was quite prepared to turn a blind eye to their conduct because they delivered such great results. In fact, the ability to achieve goals, without regard to the impact on coworkers, was often lauded in their companies. What mattered most was that the enterprise hit its numbers, and kept shareholders happy. This kind of short-term thinking often perpetuated a pattern of increasingly abrasive behavior.

What also perturbed me was that despite all the recent attention on bullying and aggressive behavior at work, little progress was being made on reducing the incidence of the problem. The longer-term consequences of abusive workplace behavior were quite apparent: good people left bad leaders; mistrust stifled creativity; the stress caused burnout and reduced productivity; and organizations that tolerated poor conduct gained a reputation as poor employers. Many of the books on workplace bullies or “jerks” focused on protective strategies for coworkers, suggesting that the problem was intractable. Other writings focused on need for policies and procedures for handling accusations and complaints. Although these efforts were intended to ameliorate the suffering of coworkers, none addressed the fundamental causes of the issue.

My training in Organizational Systems led me to explore this phenomenon through a different lens. I became curious about what was occurring not just in the self-system (what was occurring within the individual), but within the management or organizational system. I also looked at prevailing beliefs about the nature of work and leadership in our society. Could it be that organizations and societies were unwittingly contributing to the problem? By unveiling some of these underlying patterns, values, and assumptions, the problem could be seen in new ways. The different perspectives also opened up fresh avenues for change (what systems thinkers call the points of leverage in the system).

This point is particularly important to consider. Talking about a concerning problem is one thing; finding a solution is another. The power of systems thinking is that it gets to the heart of what is going on. It helps us find possibilities for lasting change, and by-pass quick fixes that only provide temporary relief.

In the case of abrasive leadership, one common short-term solution was to move people around, so that affected individuals no longer had to work with one another. (Unfortunately, it was usually the employee who was transferred to another work unit, not the offending boss). Another popular response was to send the leader off to a short stint in some kind of interpersonal skills training program, what some managers refer to as executive charm school. Coaching was also often used — the boss of the poor-conduct leader, not having the time or perhaps skill to provide the individual with needed guidance, would be hopeful that an external coach could turn things around. Or, the company would simply cut a check and says good-bye to the errant leader. The problem with that, of course, was that not only did the firm lose a high-producer; it did so at considerable expense. Moreover, as a student of organizational systems would note, the real issue was never addressed. The organization was still in the dark about how this individual came to be in a leadership role, and what went wrong from there.

In examining in my study the phenomenon of abrasive leadership through a systems lens, several important findings about causal factors emerged. One was that most of leaders who engaged in an abrasive pattern became managers without having much understanding of what leadership entails. Strong individual contributors, they were tapped on the shoulder by their company for a management role with little preparation for the role. Now responsible for a work group, they tended to employ approaches that made them successful in the past—working long hours, driving hard for goals, pleasing demanding customers, and acting quickly and autonomously, with little time for relationship building. When faced with having to get work done with and through others, they became stressed and anxious, leading them to take charge, over-control, overreact, and lose patience when others did not perform as expected.

Another key finding was that these abrasive individuals worked in organizations that rewarded results, but not how those outcomes were accomplished. Consistent with my practical experience, no one provided them with direct feedback about their behavior, especially not their employees, who feared inciting their ire or maybe even job loss. In many cases, the abrasive leaders had a protector in the organization, usually their manager. That boss was also reluctant to raise concerns about the leader’s conflict, but due to a different kind of fear: that of possibly losing a high performer. The organization thus colluded with the poor-conduct leader, allowing the pattern to continue.

As might be expected, the problem of abrasive leadership tended to be exacerbated by poor market conditions, or some other kind of pressure on performance. The effects of competition could be felt inside as well as outside, as managers competed for resources and influence. Senior leaders in such organizations often opted for short-term gains without regard for downstream consequences, including the impact on people.

These examples of the systemic factors affecting organizational and individual behavior suggest that the place to start in preventing or mitigating the effects of abrasive leadership was with looking at how leaders are selected and oriented to their role. They point to the need to train managers to be caring and respectful as well as focused on results. Feedback and recognition systems are also key; people tend to play the game the way they understand the rules, and abrasive leaders are nothing if not clever. If organizations and societies want different behavior, they need to create different incentives. And, they have to be willing to take a stand for their espoused beliefs.

Lynn can be contacted at [email protected]