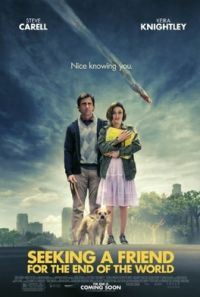 Just in case you value such things, spoiler alert. Although what I have to say shouldn’t actually come as much of a surprise.

Seeking a Friend for the End of the World is an end-of-the-world movie in which the world actually ends.

There are actually a number of complicated love stories in this romantic comedy about the end of times. In the premise, an asteroid is Earthbound and the team sent to destroy it has failed (a knowing wink to the legions of movies about catastrophic asteroid impacts). One protagonist, Dodge, has been living heretofore a meaningless and unsatisfying life. He works for the insurance industry at a banal job; his wife leaves him at the start of the film; even his attempt at suicide early in the story is a failure. He wakes not only still alive, but saddled with a dog some stranger has left him.

The other protagonist, Penny, is more hedonistic but her life is, ultimately, equally banal. Her primary relationship is with her record collection. This is partially a movie about missed connections: Penny missed her last chance to visit her family in England, and a mail mix-up combined with her lack of responsibility cause Dodge to miss a letter from an old girlfriend. It also has much to do with banality, empty hedonism, and what really matters.

Initially, following the news of the impending disaster, Dodge continues his job as if nothing is different. Others party, using drugs and engaging in casual sex. There are, after all, no more consequences. One man, shunning suicide as sinful, takes out a contract on his own life. One police officer pulls over Penny and Dodge for speeding and winds up impounding their vehicle, locking them in a prison cell. Work and rules are thus demonstrated as banal, as are wish fulfillment and self-indulgence.

My own favorite scene takes place at a restaurant chain called Friendsies, where the servers have taken over. They come to work not out of mindless rote or an inability to adapt, but because they love one another and enjoy feeding people. The servers are portrayed humorously as having very permeable boundaries, sitting in the booth with Penny and asking to touch her hair; Penny is unaware anything is inappropriate. That the night devolves into yet another drug-addled orgy perhaps is not surprising, but this time genuine love and even agape are involved. Here is a turning point in the story.

Predictably, there is a love affair between Penny and Dodge. Penny is trying to make up for her irresponsibility by helping Dodge track down his former lover but he has lost interest in this mission, knowing he loves Penny. Meanwhile, he makes a number of sacrifices to help her get home to England, not the least of which is resolving some issues with his estranged father.

At the end of the film, however, Penny is unable to complete her journey, preferring to return to Dodge and spend her last moments on Earth with him.

“I thought we were going to save each other,” she says.

Aside from the ability to draw laughs from the strange situations surrounding the actually quite inevitable end of life, the film is remarkable in that the world actually does end at the end. It is not a Hollywood movie and so does not have a Hollywood ending. Watching the scene fade to white as the world is annihilated is actually uncomfortable because of the hundred clichés we have all seen in such movies. Last-second interventions, unlikely victories, deus ex machina. I found myself watching even through the credits waiting for the savior to work its magic, and it never came. Things were allowed to end as they naturally must.

Right now, we are in the midst of calamity. In movies, even this movie, it is some rogue space object that can and must be stopped that does for us. In actuality, it is our own behavior, or at least the behavior of psychopathic corporate, for-profit interests. We could do something about climate change. Like an asteroid, breaking it into smaller pieces might not be helpful but we could change the course of the phenomenon with sufficient will.

But we are hedonists, like Penny, or workaday slobs like Dodge, or rules-obsessed officers of law like the cop who arrests them. Otherwise, our reactions to knowing the end is coming are to escape—through drugs or sex or movies.