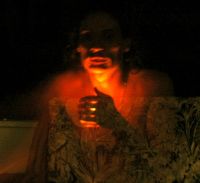 Listening to the Gospel Sunday was a difficult experience. I had an adolescent girl on hormones. Concentration was made more challenging when my pubescent daughter began crying because her socks did not match her dress. Unlike Jesus, my daughter does not wear white, as it becomes an invitation for her clothes to be used as a canvas with chocolate and punch.

Jesus’ Mother must have had a trick for keeping her Son in all white. I cannot imagine it was easy, given they lived so close to the Sea of Galilee. Water plus dirt usually means muddy clothes. I mused on this factoid as the priest mentioned Jesus’ clothes turned dazzling white. What did Mary use on his clothes? To know this was worth gold to me.

Reality surfaced as I heard the rest of the story. Jesus took Peter, James and John, (PJJ… the PJ’s for short), up to a mountain and the three fishermen were privy to quite a unique meeting. Jesus was there on the mountain talking to Moses and Elijah. A paranormal encounter experienced by three men, all at the same time! I thought this whole scene was curious. The PJ’s were pretty dumbfounded. The Gospel even admits as much when it says Peter said something stupid like, “Let us erect three tents for you, Elijah and Moses” (Mk 9:2-10) as though a ghost could be contained by a tent. (Everybody knows they can walk through walls. A tent is much more permeable.) Was Peter even thinking clearly? Or was he just stunned by what he saw?

The Bible rarely recounts instances of group hallucination or ghostly apparitions. Ironically, Jesus told the PJ’s not to speak of this to anyone. I suspect it would not have been wise to disclose it to others. Had it happened in our time, the PJ’s would have had a television film crew would have followed them around for the next episode of Ghosthunters or Paranormal Experience if they claimed to see 1500 year old ghosts, unless they were over the age of 80, at which point they would have been prescribed antipsychotics. Jesus had a point. People don’t usually like their sense of reality shaken. Given what happened to my father-in-law when he claimed to see dead people, Jesus was right.

My father-in-law, Granddad, had a rough time near the end of his life. He lived in the house he was born in which dated back to the mid-1800’s in rural Ireland. His doctor was worried the mini-strokes he was having were getting worse, so he prescribed Lipitor and a few other medications that left Granddad sleepless at nights. Pretty soon, Granddad’s sleeplessness turned into sleep deprivation psychosis. He complained he frequently saw his dead loved ones in the upstairs rooms. His doctor prescribed the anti-psychotic Seroquel. That was when the decline really began.

Granddad lost his motor control, including bowel and bladder, which was enough to inspire the family to place him in a nursing home. The poor man languished for three years, despite my husband’s insistence that Seroquel and Lipitor were the genesis of his problem. It was no use. The nursing home needed Granddad to “stay calm.” Why it never occurred to the doctor to ask Granddad why he thought he was seeing dead people, or who the dead people were, is a mystery to me. Granddad died three years ago, after becoming completely incoherent and bedridden. For a man who climbed ladders into his 90’s to paint houses, it was a real blow. The family said it was to help Granddad’s mental distress. I suspect the mental distress was not his, but theirs. My husband grieved the loss, feeling it did not have to be this way.

In an article for the Pharmeceutical Journal this month, Spielmans makes the charge that anti-psychotics are being used for the elderly in all countries in order to keep them compliant for overcrowded, understaffed convalescent facilities (Spielmans, 2015). He urges prudence in the prescribing of the drugs for elderly patients, citing all the side effects we saw with Granddad. What makes this worse is the fact that it was a missed opportunity.

Granddad lost his wife a few years before this all began. He often mentioned “seeing her upstairs” when speaking of the phantoms in his bedroom. Perhaps his visiting ghosts were psychic pain, as Schlesinger (2012) describes, requiring some psychoanalytic ghostbusting. Understanding the way a ghost manifests in a person’s life can give clues to unresolved past experiences. These can be processed through play therapy, psychodrama, or Gestalt empty chair methods. It may have eliminated both the distress, and the ghosts, according to Schlesinger.

In Granddad’s case, he had issues with his mother and father favoring his older brother. Granddad was a very intelligent man and wanted to go to college. However, in rural Ireland, high school and college cost money. His family chose to have Granddad remain home to run the family store. This might have explained the visions of his mother he reported. The visits from his wife may have been psychic pain for errors in his relationship with her, or his parenting struggles with his children. Schlesinger suggests hunting for these ghosts and doing “bad object therapy” (Schlesinger, 2012, p. 134) may allow the individual to detoxify their experience.

The experience of seeing a dead spouse may be more common that we thought. In her blog, “Communicating with the Deceased,” Wortman (2011) suggests as many as one third of those who have lost a spouse to death report seeing the spouse after they died, with an additional one third report hearing their spouses voice or feeling the deceased spouse near. While being cautious to admit this, many who experience this type of other-worldly communication seem to be comforted by it. The ghosts may have also been a means of reconciling his impending mortality, a way of coping with the isolation he felt, or simply a recollection of those he loved manifesting in a tangible way. They did not seem to really bother Granddad so much. He seemed to enjoy it.

Wortman states it may be a dream experience, or an actual perception of physical manifestation. Whether it is physically real does not seem to matter as much as whether the experience comforts the grieving person. My grandmother admitted to me that she once saw my grandfather a week after he died standing at the bedroom closet. He was dressing for work as he had done for the 46 years they were married before he fell sick with cancer. I believed her and made her promise to come to me after she died to tell me what life was like on the other side. “But,” I said, “don’t come to me in reality. Come to me in a dream. I don’t think I can handle seeing you in reality.” Grandma promised she would.

Sure enough, one week after she died, she came to me in a dream. I was very distressed because Grandma was like a mother to me. I really missed her, yet in the dream, I forgot she was dead. “Oh honey, it’s just like changing channels on a television set!” (It took me a very long time to figure out what she meant by that.) She has visited me regularly in dreams at least once a month, more if I need it. Her most recent visit was last Saturday to remind me to take pictures of my grandson’s birthday party. (I often forget to do this and later lament my absent-mindedness. Grandma always remembered her camera.) Even if the visits are not real, they feel real and they help me in my grief.

My husband still mourns the loss of Granddad. A few months ago, my husband had a strange dream. He saw his father in the room where his father reported seeing all the phantom ghosts, before he was put on Seroquel. His father was distressed, screaming for help. My husband woke very disturbed by the dream. The dream was so disturbing to him, he decided to visit the “home place” (as the Irish call the family home where they grew up) to check on the new owners. My husband grew up in the home place, just like his father, and it was painful for my husband to let go of it in order to sell it.

My husband went to his home place, asked the new homeowners if he could see the remodeling they had done and wandered into the room where he saw Granddad in the dream. “Dad, it is okay to leave now. They will take care of the house. I need to let it go,” he whispered. My husband reported feeling as though his father was suddenly no longer in the room with him there. Granddad seemed to know my husband was still holding onto the home place as a form of grieving. When my husband emotionally released the home place, Granddad seemed to be released. Was he ever really there? Who knows? My husband has found peace with it and that is what is important.

Healing, sometimes, needs a little help from the other side. Perhaps this was why Granddad was still in the home place, or why Jesus was on the mountain with Elijah and Moses. Through it, my husband learned to let go and forgive his father for the pain of losing the home place. The PJ’s may have needed a spiritual boost to know there was more to this life than what we can see in this world. Letting go, forgiving, hoping our deceased loved ones are still with us in some way… these are things we all need. Maybe the PJ’s needed to see Moses and Elijah to trust what they believed. Perhaps it was Jesus’ way of letting us know it is okay to seek help this way. The possibility that everything is on a continuum may help us all stay connected with loved ones we have lost to death. Or perhaps Jesus was trying to show us that death is no longer relevant if we believe Him. I suppose this depends on your faith.

Of course, this doesn’t help my daughter, who still cannot seem to find socks to match her dress. There are some things we have to figure out on our own…without the help of Jesus, Moses, Elijah, or Grandma. Yet, I wouldn’t put it past Grandma to visit my daughter in a dream to remind her to bring her dirty socks to the laundry room before next Sunday!

Wortman, C. (2011). Communicating with the deceased. Retrieved from This emotional life: Grief and loss blog: PBS.org