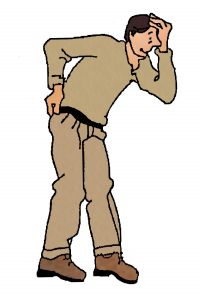 I haven’t seen the doctor. Snowpocalypso 2015 was suggesting a non-driving weekend, and they’d only want me to take a narcotic painkiller. I’m not so keen on the idea.

The last time they suggested it, I was agreeable. But the pills did little for the first pain I was feeling, and also inspired a second—a migraine headache. I took another for the headache, which made it worse, then I dumped the pill bottle in the toilet.

This week, I seem to have hurt my back. How, where, I just couldn’t say. All I know is that it hurts. I’ve never felt anything like it. When it surprises me, such as by spiking when I swallow a mouthful of coffee, it rips a shout of angry shock out of me. Now I’m as stoic as Jamie Hyneman, so that should tell you something.

Since there’s nothing much I can do about it, I’m trying to see the pain as a thorny gift. Having grown up with Asperger syndrome in a time before we offered any sort of help to such people, I’m well aware of thorny gifts. I think they’re the best kind, in the long run.

Pain is introducing limitation. Last night, it took three tries to strip off my shirt for bed. Now I could have slept in my turtleneck, but I suspect even Rollo May didn’t go so far as that, and it would have been hot, uncomfortable, constraining about the throat. Getting my right arm high enough to pull the thing over my head, though, was excruciating. After two tries of doing it slowly and tenderly, I just went, well, the pain won’t kill you. And if it were to, it’s been a good sort of life, hasn’t it?

I can’t lean back in a chair. I have to sit straight up the way Mum always told me to.

I have to drink my coffee with my left hand, awkward and unhabitual.

I thought about asking my wife to help wash my hair, decided to leave that for a time when it could be something of affection rather than dependence. I washed it myself. It’s quite long and runs to oily, can’t be neglected.

I’m in charge of food. I made dinner last night mostly left-handed. I hid the pain until after supper, expecting the family would leave for Tae kwon do, but they stayed in. I couldn’t hide it any more after that and snapped at them.

Well, those are some of the thorns. What about the gifts?

Have you ever noticed how time seems to slow down when you’re hurting? You get carefully into bed at the end of the day and think, God, that was a long one.

In a life that has been whirling by much too fast lately, I’m grateful for a day spent present—even to pain.

The things I can and must do, I am having to do mindfully rather than by rote, routine, habit. Dress slowly, planfully, strategically (I’ll be wearing a button-down dress shirt with sweatpants, because I can take all that off at the end of the day, no problem). Drink coffee with deliberate, planned movements of the off-hand. Sit carefully, not just sprawled across the furniture but deliberately poised. Breathe in a measured, even way.

How can I do less? Last summer, I wrote a book about how to value pain, use it to actualize ourselves. It might never be published, but still I’d find it hard to dismiss a little pain so lightly after the worthy suffering of creating the book. Eight to ten hours a day, every day, until it was done.

Some writers are notorious for giving us beautiful ethics they fail to live by. Undoubtedly, I will live troublingly blithe to some of the beauty I try to introduce to the world. But not today.

Should this pain become permanent, I’m sure it would become every day harder to value. The slow crawl of time through pain would inspire sadness or rage, make me as prickly as I was in graduate school when my back hurt then. But today, I exclaim at the twinges and then laugh at myself and love my family.