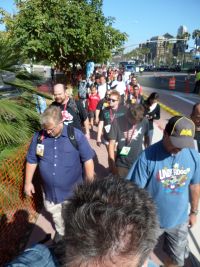 To the woman in line at the check out this morning:

It was sweet of you to strike up a conversation with me this morning as we waited in line. I saw the surprise on your face when I started to speak. Your eyebrows furrowed and your forehead crinkled while you tilted your head to the side in your attempt to focus your listening. You smiled at me then and told me slowly that I speak English well, before asking me where I am from.

You may have noticed my body turning away from you in response to your compliment, and perhaps I may have stepped away from you slightly. You might even have noticed that when I replied that I’m from England, that this came with a tight-lipped smile. I turned my back to you then in the hope that you might pick up from these subtle signs that I was disengaging from our conversation. You see, it wasn’t that I didn’t want to shoot the breeze with you, or that I didn’t hear your compliment, it’s just that I knew that what would follow would leave me feeling dejected.

I guess you didn’t notice this though because your curiosity about what/who I am and where I might fit into your pre-existing pigeon holes motivated you enough to ask me whether I’d learned to speak English there or in the USA. At this point, you may have noticed me taking a deep breath while simultaneously stiffening my neck. The deep breath was to help me calm myself internally, giving me time to remind myself that your ignorance is not your fault, that you don’t know what you don’t know, and that based on past experiences confronting such ignorance with defensiveness or anger would likely make matters worse. The stiffening in my neck was my catching myself in my body movements to avoid me shaking my head in disbelief. You know, the way you might do when you get really confused and need a reality check, so you shake your head in the hope that it clears things up when you open your eyes again. But I knew that shaking my head wouldn’t help matters, and I didn’t want to appear rude, so I refrained from following through with what my body instinctively wanted to do.

I’m not sure what happened for you next when I repeated that I’m from England, so yes, that’s where I learned to speak. You appeared even more baffled by me and looked at me as if I were an alien. You asked me, “Do they speak English there then?” At which point I was enormously grateful that my turn in line had come and I was able to extricate myself from our conversation, but not before telling you that this conversation was confusing me now. You looked hurt and confused and muttered something about how you were just trying to be nice.

No. You weren’t being nice. You were being inquisitive out of ignorance. I’m actually okay with that. We don’t know what we don’t know and we all suffer from a level of ignorance. But you weren’t being nice. You didn’t mean to be rude or condescending, and it wasn’t your intention to irritate or upset me. I know that too. When you said I speak English well, I know you meant it as a compliment. This doesn’t mean that it actually is one. The implication is that I am a foreigner, and it’s a surprise to you that I know how to speak English, let alone speak it well. Your surprise tells me more about you than you realize. It tells me that you are not aware of your white privilege. It tells me that you have never had to think about what it means to be white. It tells me that you live in a homogenous world with very narrow horizons. I’m pretty sure you weren’t actually asking me if English people speak English, although if you were, I think that would be a whole other level of ignorance that I’m not sure I could actually get my head around. I’m guessing you meant to ask if Chinese people in England also speak English, or something to that effect.

To you, our interaction and your experience of me this morning was probably something novel and maybe a little amusing. I imagine you went home and thought nothing more of it, other than maybe wonder why I was so abrupt with you when you were just trying to make conversation. What you don’t know is how much these kinds of interactions are every day reminders of my yearning to just belong and be accepted for who I am, without having to justify my existence. Sometimes, I can muster up the patience to be polite in these encounters, and other times I just find them bone weary exhausting.

I can understand it if you think I’m being over dramatic and/or over sensitive. I can also understand if you might be confused by how I have turned a friendly conversation and your genuine curiosity into something so loaded. I know that you don’t get it.

Here’s the thing—just because you don’t get it, it doesn’t mean that it’s okay. Just because you don’t get it, doesn’t mean that it’s not real. Just because you don’t get it, doesn’t mean that I will give up on trying to make the invisible visible to you. But what I really want you to know is that in my attempt to do that, I might lose my cool and I hope you can handle that gracefully. Because, quite frankly, if I am drawing on all my reserves to engage in a difficult conversation with you about what it means to be in the minority living in white suburban Ohio, I need you to find some compassion. It’s the same level of compassion that I attempted to dig up during our conversation this morning. Without accessing my compassion towards you, I would have lashed out and ranted at you for your ignorance. I could have taken your ignorance and ascribed it as a trait of all Americans and washed my hands of the whole situation by telling myself that there is no solution for such parochialism. Without accessing my compassion towards myself, I would have berated myself for not having enough energy to just go along with the conversation and thank you for complimenting my English.

So please, dig deep and find your compassion for those who are different to you by asking yourself what do you take for granted by living in a world where everyone looks, sounds, and behaves the same as you? What if you didn’t have that sameness and sense of belonging? I urge you to please find that compassion within yourself to acknowledge that what you think is “nice” might actually be unintentionally offensive, and what you think is a compliment is loaded with privileged assumptions. So forgive me for not accepting your comment as a compliment, because it really wasn’t one.

With hope for a more compassionate approach to difference,
The British Chinese woman living in Ohio that confused you this morning.