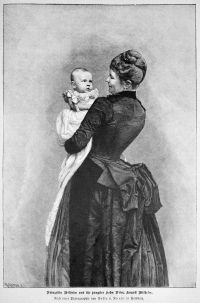 Autism and small babies were never considered before creating the weekly practice of sitting quietly to pray in church. You can tell today, Palm Sunday, is one of the year’s longest by the volume and activity level of children under the age of five as the time exceeds the one hour mark. I sat in church, straining to hear the music and the priest, but all I could hear was the crying of little babies and the rustling of children. One of said children happened to be mine. Liam was too excited to be still today. Even without much speech, he knows this week he will have a birthday.

Liam turns thirteen on Wednesday. A child born on April Fools’ Day should be automatically infused with an ability to perceive irony in any situation, and Liam often does, despite his economy of words. When his dad bought a dog house for our pregnant goats (who are due this week), Liam saw the word hotel on the house and declared, “HO-tel? More like GOAT-el!” He may not speak much, but when he does, he puts every word to quality use.

Through the cacophony of crying and noise at church, I heard the priest make an existential parallel. He suggested we should find the meaning in our own suffering. I am pretty sure he was contrasting this to the Palm Sunday reading, but Liam was one of those big struggles for me. Before Liam was conceived, I had been struggling to have a child. I had miscarried three babies and the last one was a real blow. I lost the baby on Mother’s Day. It hurt my heart so much; I had decided not to try again. My heart could not face losing any more babies. Instead, I resigned to being content with the children I already had.

The week after Mother’s Day we travelled to Ireland, as my husband’s daughters were making their sacraments. I was miserable and was suffering with a lot of pain from the latest miscarriage but the sacraments are a big deal for us, so I went anyway. My husband thought he would cheer me up by taking me to the pub owned by the family of the singer Enya. He knew the family and was quite proud of this knowledge. The road on the way to the pub was built on bog, so it was horribly bumpy and uneven. Each bump sent me into gasping fits of pain. My eyes filled with tears by the time we finally reached the pub. I just wanted to go home. I was in agony with pain, both spiritual and emotional. Meeting Enya’s dad did not offset the sorrow and pain.

That night, my mother-in-law came to me in a dream. She had died one month after we were married in the States, so I never had the pleasure of meeting her. There was nothing special about the dream. She spoke simply and told me I had a problem in my womb. She urged me to go to the doctor when I arrived back home to America. That was it. No fanfare, nothing cryptic. It was a simple, single message, clearly spoken from the mouth of a woman who had been dead for two years. I decided it was best not to question my mother-in-law. The pain was agonizing enough to make me accept her advice. I scheduled the appointment with the doctor as soon as I returned home.

Sure enough, the doctor discovered through testing that I had a very serious pseudomonas infection. It could have killed me, had I not seen her when I did. It was so serious she considered putting me in a hospital, except I was on a business trip for work by the time she knew. I refused to go to a hospital so far from home. She made me promise to take the medication she prescribed as soon as possible and to see her the first day I returned. I agreed.

“Oh, and don’t get pregnant for at least 12 weeks. We need to clear this up first,” she said. That was my undoing. Pregnancy was inevitable now. Ten days later, I was pregnant with Liam. To my defense, I actually did try to avoid it. It was simply destiny for Liam to be.

The agony in having multiple miscarriages made carrying Liam an even greater miracle. He was unique from the beginning. The first few days of life, an old man noticed Liam would look straight into his eyes. “He has an old soul. He will be a smart one!” He was right. Liam is very smart. But Liam has managed to be even more than smart. The miracle of his conception was the inspiration for me to return to school. When he was later diagnosed with autism, he was the inspiration for me to go to Saybrook to study psychology. He is the inspiration for my dissertation subject, and he is the reason I challenge everything I have learned, understood, and communicated thus far. His autism and the way he confronts his journey on a daily basis makes any excuse I use to abandon mine seem pathetic.

Liam has a way of seeing the humor in a thing and will giggle, even if it seems out of place in the moment. Today was no exception. The choir hit a sour note and Liam let out a full belly laugh. It won me a few glares but a few giggled right along with him. He finds joy in the moment, and accepts life as it comes to him, usually finding a way to work the topic of Pixar Animation Studios into the conversation. He does not give up. He pushes through with his purpose every day, even with the struggle to communicate and socially fit in to the world. Yet, had I not experienced so much pain and heartache prior to conceiving Liam, I doubt I would have appreciated his laughter so much today.

As he rested his head on my shoulder and took my hand during a quiet part of Mass, I realized how true the words Father Jose spoke were. Suffering helps us in many ways on our journey. Sometimes, it helps us to learn humility and endure, giving others an example of total love and acceptance. Other times, it teaches us what is important in life and encourages us to continue living. It is easy to resign and give up the fight. It takes courage to find the stamina to keep going. The prize, the goal, is what waits for us in the end. Liam was my prize, as are all children.

So, in honor of Liam, have a most happy birthday. You are not among this week’s April Fools!