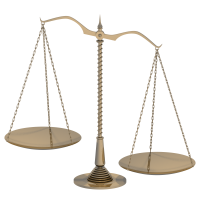 “Likewise, I have always insisted on justice for all the world over, because justice is indivisible.”  –King, 1998

This quote is part of a piece on the Vietnam War. It’s a difficult piece. King has trouble reconciling opposition to the war with the civil rights movement. For me, it’s perfectly clear. Pacifism seems a natural outgrowth of the nonviolence movement and no reconciliation seems necessary.

But what I want to look at is just three words out of the sentence: Justice is indivisible.

We could have done it this way:

But that would have been just the slightest bit dishonest.

These three words are nearly a throwaway here. Three words out of dozens in the original source, hundreds in the chapter, thousands in the book. Justice is indivisible. But they rest on very substantial assumptions.

First, justice exists. It is discrete, measurable, a thing in the world and in itself. It is not a mere abstraction but something that affects us and that we affect. And is has qualities of correctness or incorrectness.

And that justice is universal. It is all places and all times. A change in your justice status changes mine across space and time, like subatomic particles dropping out of undifferentiated states into measurable ones.

That sounds hard and absolutist. But it is also true. Tale our justice system for example. Let’s say I get pulled over, and you get pulled over. I get what appears to be justice: a fine in proportion to the misdeed. You, however, get pulled from your car, made to kneel and lay down in the street, searched, your car torn apart and impounded, your money confiscated for no provable offense.

An injustice has happened. That renders my justice null and void. Because justice is predicated on fairness, and what has happened is unfair. There are clear racial dividing lines for our justice system; some people are more likely to be searched, arrested, ticketed, charged, overcharged, found guilty, and sentenced to longer time because of the color of their skin. And some people have better access to favorable outcomes. Being white and/or wealthy increases ones chances of escaping penalties.

We tend to confuse favorable outcomes with justice. Justice was done when someone else was punished, and it was done when we were not punished. But when some people get consistently better outcomes than others, what we have is not justice at all: it is privilege.

Justice is indivisible. That’s why racism is a problem for white people. We don’t have justice at all. We have privilege. That’s why sexism is a problem for men. Justice is indivisible. Women make 78-81 cents on the dollar compared to me, depending who you ask. Men don’t, therefore, get fair pay; we get unfair pay, unduly skewed to our sex. That’s not justice, it’s privilege.

And we can’t all have privilege. Privilege means going to the head of the line, getting special treatment. That always comes at a cost to whoever has been waiting longer when you get to cut in line in front of them.