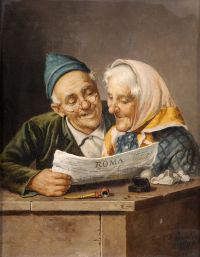 Care for aging baby boomers is the subject of this week’s Existential Roundup. We begin with a news story that caught my eye and made me scratch my head. A man, aged 78, is being accused of rape for having sexual relations with his own wife, simply because she was diagnosed with Alzheimer’s and lived in a residential facility. The curious details surrounding this case may contribute to understanding the complex problem society will face with the impending Silver Tsunami, a name given to the increasing number of aging people from the Baby Boom generation. The case, as well as the ethical questions surrounding sex in older populations is the focus of the article in the April 13th edition of The New York Times. For one thing, the couple had been married only since 2007, so the woman’s legal guardian was the daughter of her previous husband, and the current husband was prohibited from having sexual relations with his wife of seven years because the daughter believed it was not appropriate. However, there was no in the evidence to indicate her mother was opposed to this activity. More telling is what adult child would see as the appropriateness of sex between her aging parent and a second spouse.

I know of many people who shudder when thinking of their own parents’ sexual activites. It seems to be a universally felt repulsion, but there is also seems to be a general perception that the elderly should not engage in this activity. This is something that our culture struggles to accept, and The New York Times article astutely zeroes in on the issue. Do we have a double standard for ourselves, demanding tolerance and acceptance of all sexual expressions, while demanding our parents and grandparents adhere to a completely different and opposite standard?

New York Magazine explores the real issue of why people are so squeamish about the subject of the cognitively impaired, such as the Alzheimer’s community, and the ability to give consent to have sex. Jesse Singal examines the topic in depth, asking the question, “Should Alzheimer’s patients be allowed to have sex?” What defines consent, who defines it, and how often it comes up seems to be more of a subjective concept than a legally arbitrated one, and this may explain why a daughter might object to a stepfather having sex with her mother, as in the case above. The problem strikes at the core of what it means to be human and in relationship with others, and how affection is expressed. Singal suggests the elderly need to be protected from predators, but at what point does a stepparent become a predator?

Or, in the case of former Supreme Court Justice Sandra Day O’Connor, whose husband suffered from Alzheimer’s and became close with another female Alzheimer’s patient, when does the daily encounter with another resident that turns into sexual intimacy become adultery? Can moral standards apply to those with cognitive challenges as they are to the rest of society? Singal poses some interesting questions, with valid arguments for both sides to debate. Does the diagnosis of dementia mean a total loss of individual rights that were previously enjoyed by spouses? It is wonderful food for thought.

Elder care, especially for those facing dementia, is a person-centered endeavor for one Dutch care center. CNN News reports about a village that promotes integrity with specialized care disguised as the typical small town, bound up inside safe walls. Hogeway is a care center designed to minimize the perception of helplessness in the resident with dementia, augmenting a sense of normality in their daily lives while providing security and immediate care for residents. The “workers” of the town include gardeners, shop clerks in their store and waiters in restaurants who are all actually caregivers. It is all in the way you look at it here.

The décor is even designed for the specific preferences of the resident, including variations that span the spectrum of art and music to religious. The goal is to help the residents live a higher quality life and the results have shown they eat better, take fewer medications, and live longer. Reducing the acute care may also reduce the amount of revenue the Dutch government must pay to care for their elderly citizens, since this is also a responsibility of the government. It has received attention from other countries, including the U.S. and may prove to be a better solution than the traditional nursing home environment.

One woman developed a unique approach to working with elderly dementia sufferers. The Huffington Post reports on Jenny Rozbruch, a 32-year-old who developed an iPad app to help her grandmother Frieda, a Holocaust survivor, recall key parts of her life story through photos and games to stimulate the mind of those struggling with the effects of dementia. The app, which is free from the iTunes store, is called GreyMatters, allows the family members to build a visual narrative of the individual’s life to aide them in continuing their relational connections by accessing the long-term memory functioning of their brains. It also allows the downloading of familiar music, something that has shown to improve the memory of those suffering with dementia while improving their quality of life.

San Francisco’s Silicon Valley is getting the message and producing new and innovative methods of improving the lives of seniors through technology as well. Forbes magazine reports the senior executives from Yelp, Apple, Facebook, and Paypal, along with a few celebrities and politicians are joining forces to improve home care for elderly Americans. The group is spearheading the objective by calling it Honor, and the goal is to make elder care easier to find and access, which will allow them to remain in their homes longer. The group hopes to also improve the work conditions of those providing care, even going to the extent of offering $17 per hour to in-home care providers in some parts of the Bay Area. But they aren’t stopping at just income.

They want to promote the career of caregiver to a higher level to give it greater meaning and prestige. At the same time, they will provide training for employees and technology tools for the senior clients and their families to choose their preferred caregiver, making it possible for families to rest easy while their elderly parents remain in their own homes. Interestingly, the motivation for so many tech executives like the CEO’s of Google, Path, AltSchool, and NextDoor to do this has to do with meaning. They state, “I am tired of dancing pixels on a screen. I want to be able to look at a human in the eye and know I am making their lives substantially better.” So being wildly economically successful isn’t enough anymore. To improve the lives of their elders is the noble goal these executives seek. Not a bad objective, considering they may also, one day, need the help.

Meanwhile, a new discovery by a team of researchers lead by Carol Colton from Duke University and published in the April edition of the Journal of Neuroscience and on the Duke University website is emerging that may pave the way for a better Alzheimer’s treatment. Specifically, the microglia of the brain in mice created to have the same genetic immune composition as humans with Alzheimer’s were found to express a gene that suppresses the immune system. The researchers found that the enzyme that breaks down arginine was highly expressed in the same regions of the brain that developed plaques. They tested their hypothesis by blocking the production of the enzyme, arginase, by giving the mouse a drug called difluoromethylornithine, or DFMO. The mice that received this drug developed fewer plaques and did better on memory tests. The scientists are now proposing to use this drug in a trial of early Alzheimer’s treatment, in order to block the progression of the disease. Unfortunately, this is still years off.

Although a new treatment to halt Alzheimer’s may be years away, those fighting the battle of the bulge in their middle years may be comforted by a London School of Hygiene and Tropical Medicine study. The study reported in HP Live shows those who are overweight with a body mass index (BMI) of 26 demonstrated a 34% reduced chance of developing dementia in their later years, and even those pushing a BMI of 40 enjoy 29% fewer risks of developing dementia than those who were at a healthy or underweight BMI by age 55. Additionally, if they became underweight by age 70, the increased chance of dementia remained the same as if they were underweight at age 55. With all the negative publicity obesity carries, it is about time those of us fighting our weight may feel comforted.

Keep in mind, one recent study reported that those with depression and type two diabetes had an increased risk for dementia. Since type two diabetes is often associated with obesity, the conflicting reports produce confusion as to whether the UK-based study is a case of causation versus correlation, and obesity may not actually prevent dementia, but the study highlights the fact that underweight BMI may be as detrimental to the health as overweight BMI. It also suggests there may be more to the black-and-white approach to health that often carries stigma, to which those fighting weight issues can attest.