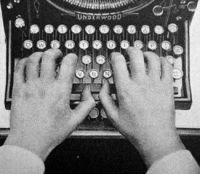 The first World Congress on Existential Psychology is coming up, in London, England. The editor oft New Existentialists, a certain Sarah Kass, has made sure our blog and our writers are represented there. Our topic of conversation: existentialism, writing, and activism.

I feel out of place helping to represent the cause or representing causes. All I do is write. Does writing right wrongs?

All I do is write.

My feeling is, existentialism requires acknowledgement of evil. Particularly, through the practice of zhi mian—or facing truth directly—the practice of existential psychology must necessarily be one of experiencing truth no matter how uncomfortable. We are completely willing to do it when it comes to death. Confronting death anxiety is central to the practice of existential psychology. But many of us quail or pale when it comes to looking at injustice, racism, sexism, heterosexism, and the million other facets of inequity or inequality that plague our nation and our world.

Writing doesn’t change the world, not directly, not like getting arrested and holding signs changes the world. But writing does inform public opinion: both by speaking truth to power, and by setting the example of speaking truth to power. There is risk inherent in doing so. For example, I’m employed by a community college and by a graduate school, and I’m very critical of the way such institutions do business. We’re failing at some of our fundamental tasks as well as exploiting labor.

But is this real activism?

I wish I had tenure. I wish I could afford to go to Ferguson, to go stand on the Pettus Bridge in Selma. Even to actually go to this conference where I’ve been invited to be part of the panel. I have to go via Skype, because I just can’t afford to take time off work or to travel.

This is where we all are, though. We’re financially on the edge, too poor to risk losing the little we actually have in order to go out and agitate the way perhaps we should. To stick our necks out for one another. So what am I supposed to tell the people at the congress about activism and writing?

Sarah Kass is amazing. She keeps the blog going through all sorts of difficulties, mostly involving people being unable or unwilling to write. The majority of posts in the last years have been hers or mine. It’s mostly the Sarah Kass show these days. If not for her, literally no blog at all. This despite being overworked and underpaid, same as the rest of us working poor in academia.

Here’s the fundamental problem: we’re trying to fight the good fight from out here on the edge, with no resources. And the way we earn our marginal livings, these things are for the very organizations we have to reform. Higher education is at the very heart of social injustice: access, cost, implicit bias, exploitation through student loans, for-profit intrusion into this domain of public good, exploitation of faculty especially and disproportionately among those of us who serve the poor.

Anyway, I’ll see everyone via Skype at the existential congress in London. If I can just think of what it makes sense to say.