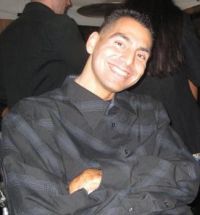 Last week, my husband’s daughter was forced to face a number of truths she never expected to learn. Her best friend, Chris, was killed tragically when a young driver in an SUV accidentally backed over him while he was riding his wheelchair on the sidewalk near a restaurant. The young driver did not even know he had Chris trapped under the back end of his car until he was flagged down by other people in the parking lot. Chris succumbed to complications from his injuries a week later. He was only 39.

Our daughter sat by his bedside from the moment Chris’ father called her, to the moment of Chris’ last breath. The tears she shed today at the memorial were a testimony to a deep, spiritual connection she had with Chris. What we had not known until today was that Chris felt our daughter was the love of his life. Hearing his father announce this fact made me cry. This man who faced the challenge of life in a wheelchair due to an accident that nearly took his life 20 years prior was in love with our daughter. It made her loss even more acute for me. Love does not follow a set of rules. When two souls find one another, the union may not make a lot of sense to the outside world. Fortunately, it made sense to them.

Of all the kind words that were expressed about Chris, the one that reverberated throughout the memorial was inspiration. Chris was an inspiration to many, all around the world. He could have faced life with despair, and considering his situation, I don’t know many who would have judged him. However, this was not his way. He embraced the challenge with gusto and never looked back with regret.

He met our daughter in college, and the two struck up a deep, lasting friendship. He went to the local bowling alley weekly and video blogged his sports commentary. Chris was charismatic from the beginning of his journey, not accepting the label of disabled but embracing the challenge he was given in life. His zest for life was found in each day, and he found meaning in every minute by making the meaning for himself.

There are times when I wonder why some people embrace such challenges, while others shrink from them. A priest once told me that, if we knew what Life (or God to the religiously oriented) had planned for us before we faced it, we would probably all run away from it. Adversity seems to define some people, allowing some to ascend to levels they might not reach in any other circumstance. Chris’ sister said that she believed the first accident actually saved Chris’ life. It was an interesting view.

It would seem that Chris lived the perfect example of existential positive psychology, as described by Wong (2009). He lived authentically, albeit contrary to the social norm by living without the use of his legs. He assumed responsibility for his life, rather than follow the social expectation of one with a disability. Chris knew who he was, and he loved life with all that it offered, regardless of the challenges. He would set out to travel the streets of our neighboring town every day, determined to be authentic.

Chris was joyful. He did not seek pity. His biggest attribute was to share his smile, which was contagious, with those who did not have one. It is a simple thing, but it is the most valuable, as it conveys a sense of honor and appreciation for the existence of others. It acknowledges the value of every human being for simply being. Chris had authentic happiness, and he lived for social connection and spirituality. By embracing his suffering as part of the life he was given, he found authentic happiness. One could say Chris had the chair-onic happiness in the same vein as St. Francis of Assisi. He had a calm joy, and it was felt by all who knew him.

Chris made his life a genuine gift to others, even after death, when he chose to donate his organs and specified this to his family. Three children now live because he thought of others, even beyond death. This completes the three values of meaningful life as outlined by Frankl: Creative value, experiential value, and attitudinal value. Chris had creative value in that he gave of himself, even his organs, to the world. He had experiential value, in that he received the help of his mother and the love from our daughter when pride might have prevented it. Finally, he had attitudinal value in that he insisted on retaining a positive attitude towards his situation even when others would grant him a free pass should he choose not to have one. Frankl was spot on in his conclusion about the meaningful life.

Chris also demonstrated the PURE model as defined by Wong (2010) for finding meaning in life. He had purpose and life goals in his determination to complete college and blog on the internet, despite the challenge of using his hands. He clearly understood the demands of his situation and life as a whole, he took responsible actions towards those goals by working daily to write about the Mixed Martial Arts fighting in his podcasts on YouTube and he often evaluated his life in his conversations with others, even commenting recently in one blog that he hoped there was a better place to go after death. His existential quest for understanding and living life was complete. He embodied existential positive psychology in his life.

I never had the pleasure of actually meeting Chris in a formal introduction. I often saw him ride his wheelchair around town, and I knew his father from church. His father has the same type of calm joy that he had. Even when facing suffering, Chris’ father embraced it and did not give up hope. His dad knows what mature happiness is, and he taught this skill to his son. It served Chris well.

It was hard to watch our daughter break down at the memorial service. Many pictures of her with Chris flashed on the screen, and his smile was as broad as hers. How could we have not known this was her soul-mate? How could we have not seen the joy on her face when talking of Chris? He meant the world to her, and it was clearly apparent now. She seemed lost without him. It was as though I was watching the most painful scene in Beauty and the Beast, where Belle professes her love for the Beast after he breathed his last breath. Only this was no beast. He was a man in a wheelchair, and her tears were a testament to their mutual love. The last petal had fallen, only this time, no transformation occurred. Chris left her, and she must now face her life alone.

I wonder if we all intuitively know the way our story is destined to be written. Our daughter often expressed her fondness of Beauty and the Beast while growing up. We still have the porcelain doll of Belle we gave her one Christmas, neatly packed in its box, waiting to be displayed. She left it in our keeping when she moved from home. Perhaps it is time for her to display Belle in her own home, to remind her that every Beauty faces the sorrow of her loss, but in those teardrops, the love they shared becomes a living, breathing entity; a witness of a life well lived. Through her love, Chris will continue to live joyfully.