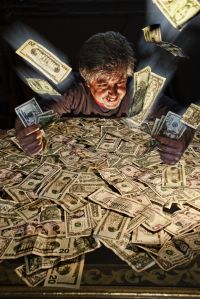 Americans are increasingly enraptured with the right to die movement. Kevorkian did his time for assisting suicides, and we overwhelmingly think his actions were righteous. More recently, a brain cancer patient elected suicide after her wedding. That term, no fewer than a dozen of my students did tearful presentations on her case.

We are good at one thing here: fighting for our civil rights. Not quite so good at earning and keeping them, but great at fighting for them. Rights for non-hetero-conformity are proceeding quickly; the right to use marijuana; the right to die.

While death with dignity seems important, necessary, laudable, the right to suicide and assisted suicide might not be all upside.

If the urge to self-annihilate stems from feelings of helplessness and hopelessness, and if this is a logical, non-ill decision predicated on balancing time left, functionality, decline, and pain, then an unfortunate truth is that poverty must enter the equation, and much more strongly than we are comfortable with.

Rates of basically every illness correlate to poverty. Early detection and sophisticated treatment correlate to wealth and good insurance plans. Healthy lifestyles are much to do with money. Good food habits go with good food availability.

The next predictor of suicidality is feeling one is a burden on one’s family or friends. Feeling burdensome is also a product of poverty. Rich folk can afford—usually through good insurance—to pay someone to take care of them. Home health care, home hospice care, home aides all come with a price tag. For most folks, when we get sick (especially the sicknesses endemic to old age) it is the eldest daughter who cares for us. The other siblings say they will help out financially, and a few even follow through. The care derails the daughter’s life for a few years (sometimes more than a few years) and often engenders difficulty in family relations.

The other predictors of suicide include pain tolerance and impulsivity. Those aren’t easy to link to relative wealth. Neither is maleness, with access to power tools and power killing tools, to a get-it-done attitude and the know-how to do it. Maleness is weakly linked to wealth but not strongly enough to make a strong assertion here.

But for the two strongest indicators of suicidality, health, and competence, wealth is strongly protective. In other words, when we advocate for the right to die, we need to be really careful we are advocating for agency and not simply for the disproportionate elimination of poor people. It is easy to imagine a Logan’s Run society that modifies socially acceptable euthanasia with the ability to buy extra years of life.

The right to die with dignity must, to my way of thinking, take a backseat to the right to live with it. Life with dignity should include a concern for the good health of the living. That means everybody gets access to the same quality food, air, facilities, and healthcare, and disparities in health are not created by relative wealth.

We live in a time and place with incredible wealth inequity. The rich few control not only the vast majority of material wealth but through that wealth, government, and even public opinion. One man gets to tell us what to think through Fox News. Most media outlets belong to a few rich men through shell corporations. When we vote against socialized medicine, we mouth the words and opinions handed to us by the rich people whose interest runs contrary to ours.

Another aspect of our unconcern for one another, our detachment, is the school shooting. Our mass murders are coming thick and fast in the modern age. While not a new phenomenon by any means, the rate at which mass murder events occur is accelerating. Three quarters of all humans who have ever lived are alive now; the figures for shootings are similar.

Suicide and homicide are clearly different phenomena. And nobody is likely to argue for the right to take lives. But the solution to these killings is the same as the solution to the need for physician-assisted suicide: lives of meaning that do not depend on power and privilege.

Mass shooters tend to have a few things in common. Much is made of the frequency with which shooters have interacted with mental health professionals and are given antidepressants. We can quickly leap to the conclusion that the drugs cause the homicide—but it is just as easy to assume they are a symptom rather than a problem.

The mass shooter is typically a young white male. In the recent past, young white males had power and privilege. Whether due that privilege or not, it has recently been eroded. The job market has lost its bottom. There are not careers any more. For most people, the job market offers a series of lateral moves through low-wage service industries without hope of attaining even middle-management. The American dream has turned sour.

Also in common is social isolation. Like rogue bull elephants, the average shooter has been socially rejected. Pushed out, ostracized, rejected. They often seem too deserve it: awkward, handsy with the ladies, peculiar, maybe with one or more diagnosed social disorders such as Asperger’s disorder.

For these people, the mass murder is an attempt at power in a world in which they feel robbed of power. Again, that their privilege was undue in the first place is no balm for the feelings its apparent loss engenders. They find out they aren’t going to have the love life they imagined, the social life they imagined, the respect a human basically deserves, the political influence we are all promised in high school political science classes, the job prospects we still base our social and developmental psychology around … All gone.

No coincidence at all it is young white males perpetrating these evils. For other folks, these realities have always been much closer to consciousness.

While mass homicide and personal suicide appear to have nothing in common, in truth, they are nearly identical. They are both solutions to problems of perception: that life is too painful to endure and that state cannot be changed. The pain is permanent and the person’s capacity to endure it unchangeable. There is no possibility the suffering will end and no possibility the person will grow to be able to encompass the pain, tolerate it.

In the first case, death is seen as an end to the suffering. In the second, that suffering is communicated in the worst possible way.

And if we want fewer suicides, fewer homicides, we can attempt to reach those ends with legislation. Forbid physician-assisted suicide. Make therapists and psychiatrists liable for the actions of their patients and clients. Make it possible to sue schools and school districts for the homicides perpetrated on their grounds the way you can sue a property owner when you slip and fall on their property.

If we want fewer suicides, we need more lives of meaning and engagement. If we want fewer homicides, we need the same thing. Equity if not equality. The meritocracy we claim to be: if you work hard and follow the rules, you can make good. In the richest country in the world, we can afford health care for everyone, easily, without even inconveniencing our richest citizens and without making poor people dependent weaklings. We can treat workers as valued people rather than as commodities. Make an effort to equalize educational opportunities—treat education and training as public goods rather than ways to exploit the poor.

The world of everything-for-profit creates throw-away people along with disposable containers, disposable cameras, disposable clothing… self-reliance means it’s acceptable for rich folk and especially rich white folk to wield disproportionate power while the rest of us blame ourselves for our poverty. Feel like burdens on our families when our poverty-derived illnesses become terminal because we could not afford early detection, quality treatment. Feel like drags on society when we need our daughters to take care of ourselves when a rich person could just pay someone.

In all ways we are disempowered in the modern world and it must be shocking, disgusting, revolting when we see people seek that power through violence—but at the same time that must be totally unsurprising.

Advocate for death with dignity. Go on, I support you. I believe strongly that you are right. But first, consider advocating for life with dignity.