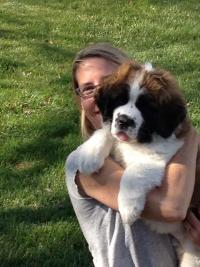 The thing about living with a tiger under your bed is that you have to be really good at listening.  No one tells you how much they talk.  Let alone how many times you’ll be bending over the side of your bed, getting a head rush in order to carry on a conversation.  The talks with my tiger never seemed to really stop.  She would grunt or purr across the house to tell me her most recent idea.  When I ventured outside, it was much of the same thing except louder.  Yet, no one else seemed to hear her voice or the many others I encountered while outside climbing rocks or playing in the creek.

As children, most of us have an innate sense of belonging in this world.  We believe our thoughts and emotions are intrinsically linked to other living beings because we feel at one with them, even though our parents shake their heads.  Unlike many, I chose to cultivate and study this connection.  At Saybrook University I became focused on how these moments of oneness, called intersubjectivity, influence scientific behavior and practice where animals are involved. Here I am addressing a sense of intersubjectivity between humans and animals.

Surprisingly, I’m not alone in experiencing moments of intersubjectivity with animals.  Results from my dissertation found that 49% of scientists surveyed experience intersubjectivity at least occasionally and it is defined by four distinct phases.  These phases are joint mindfulness, synchronized embodiment, intrinsic belonging, and transcendental awareness.  Correspondingly, participants reported significant changes in methodology that lead to the use of noninvasive techniques.  These same people were also identified as having higher levels of trust, empathy, relaxation, openness, and mindfulness.

These findings follow the trend in an earlier pilot study of mine that found healthier eating habits (e.g. plant-based diets) were related to greater animal-centered beliefs.  So it seems that those who experience human-animal intersubjectivity tend not only to show better health indicators, but also move toward methods that employ the animal’s perspective.  From a mind-body perspective this all seems good, until you realize that talking about human-animal intersubjectivity carries high risk.  So much risk that none of the participants have ever discussed these events with friends or colleagues.  As a researcher myself, I find this problematic in numerous ways, but characteristic of academia’s over dependence upon quantification that is left unbalanced.  So to those who know me, thank you for helping me find my voice and learning how to walk my talk more deeply.  And to those who have just begun this journey, I wish you courage, as the path can be unyielding and wondrous in the same moment if you look for it.