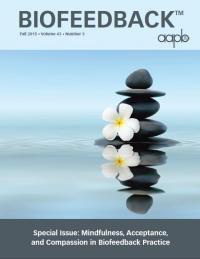 Donald Moss, PhD, is the Dean of Saybrook’s College of Integrative Medicine and Health Sciences. Since the Fall of 1994 he has also been the Chief Editor of Biofeedback: A Clinical Journal.

Donald Moss, in collaboration with Inna Khazan, PhD, has produced a special issue of Biofeedback on the theme “Mindfulness, Acceptance, and Compassion in Biofeedback Practice.”  Khazan is a Clinical Instructor in Psychology in the Department of Psychiatry at Harvard Medical School, and the author of the recent volume, The Clinical Handbook of Biofeedback: A Step-by-step Guide for Training and Practice with Mindfulness.  Khazan’s book proposes a fruitful integration of the mindfulness approach with clinical biofeedback practice, suggesting that the cultivation of an open attitude of mindfulness, acceptance, and compassion, on the part of the therapist and patient, facilitates a more successful pursuit of physiological self-regulation.

It has long been recognized that striving and effort block relaxation and reinforce physiological tensions.  Four decades ago Herbert Benson (1975) recommended cultivating an attitude of passive attention or passive volition as one of the four components of the relaxation response.   Mindfulness, acceptance, and compassion based approaches take this cultivation of an open and accepting awareness to a new level.

Mindfulness has been integrated into clinical practice in many forms.  Kabat-Zinn and colleagues initially popularized the mindfulness approach and developed the mindfulness-based stress reduction approach at the University of Massachusetts Medical Center, now practiced widely and used in countless research studies (Grossman et al., 2010). Mindfulness based cognitive therapy integrates the understanding of cognitive systems developed by Phillip Barnard and John Teasdale, with a mindfulness and acceptance framework, guiding the individual to disengage from automatic thought patterns and shift into a more mindful awareness (Segal, Williams, & Teadale,  2002).  Stephen Hayes and colleagues developed a form of psychotherapy, Acceptance and Commitment Therapy (ACT), based on an approach of accepting fearful and distressing thoughts, rather than combating them. The therapeutic objective of ACT is to be mindfully present with whatever the present moment brings us, and to move toward personally valued behavior (Hayes, 2004; Hayes, Strohsal, & Wilson, 2012).

The mindfulness and acceptance based approaches have been called a third wave in psychotherapy. Some advocates for cognitive behavioral therapy (CBT) dispute whether ACT is so different from CBT as to constitute a new wave (Hofmann & Asmundson, 2008), yet some of the critiques seem misguided (Guadiano, 2011) and mindfulness approaches continue to generate a substantial body of clinical applications and research studies (Irving, Dobkin, & Park, 2009).

In this special issue of Biofeedback, Drs. Moss and Khazan have included seven articles describing therapeutic approaches integrating mindfulness strategies, mindfulness training, or an acceptance-based therapy with biofeedback. The seven articles include:

a lead article by Dr. Khazan introducing a framework for integrating mindfulness and acceptance skills into biofeedback practice,
an article by Urszula Klich citing evidence that the cultivation of compassion and self-compassion can counter stress, anxiety, and depression,
an article by Remko van Lutterveld and Judson Brewer showing that functional Magnetic Resonance Imaging (fMRI) can serve as a “mental mirror” for meditation,
a  report by Dana R. Wyner about a pilot study utilizing  a group-based mindfulness and compassion-based relaxation training along with biofeedback, to assist university students to manage stress,
an article by Richard Gevirtz introducing his integration of  Acceptance and Commitment Therapy with biofeedback-based clinical protocols,
an article by Christopher Gilbert exploring how the mindfulness approach can transform biofeedback treatment at multiple levels,
and a case narrative by Donald Moss illustrating  the integration of self-directed mindfulness practices with mindfulness-based treatment guided by a professional.