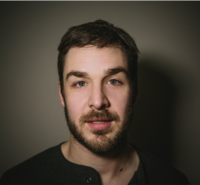 Jamie Sisley's narrative short film, STAY AWAKE, premiered at the Berlin Film Festival, won the Jury Prize at the Slamdance Film Festival, and received the National Board of Review Short Film Prize. His feature documentary, FAREWELL FERRIS WHEEL, recently premiered at AFI DOCS and won the Creative Promise Award from the Tribeca Film Institute. It will be broadcast nationally on PBS next year.

Jamie earned a bachelor's degree from the University of Virginia, and spent six years as a manager in the music industry working with artists like Tim McGraw, Faith Hill, and Dave Matthews Band. He then moved from his beloved Virginia to NYC, where he received an M.F.A. in Film from Columbia University. He's completed commercial work for Seagram's and Nordstrom's, and received fellowships from the Jerome Foundation and Film Independent. Jamie's now in development to direct his first narrative feature based on his short film, STAY AWAKE